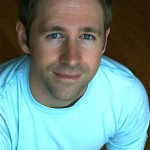 Chris Burnett is a professional actor from Arlington, Texas with an array of entertainment experiences that include a poker game with Whiplash, the cowboy monkey, riding a tandem bike with a slot machine, playing drums in Chucky Cheese’s band, and teaching line dancing to NHL hockey players. His interest in animation and video games ignited after being cast as the role of Romeo in Funimation Entertainment’s Romeo X Juliet. He also voiced Pvt. Franky LaRoche in Gearbox Software’s game, “Brothers’ In Arms: Hell’s Highway.” Currently, Chris is the co-host of Gamestop TV alongside Brina Palencia. See above for her magical powers. Brina voiced Juliet in Romeo x Juliet, and now she and Chris are inseparable in all things gaming and anime. When not working, Chris tours with his rap group The A-Town Fuzz, delivering undiscovered hits such as “Panty Raid” and “Ice Queen.” He also lent rolls the red carpet every morning for Terri Doty and J. Michael Tatum.