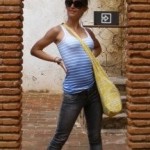 Stage and Voice Actress, Anastasia Munoz: Anastasia Munoz started doing walla and bit parts and has worked on several shows including Claymore, Sgt. Frog, Shinchan, D. Gray-man, and Bamboo Blade. She played Young Forte in Save Me Lollipop, Young Jacuzzi in Baccano!, and Mina-Dietlinde Wilcke in the soon to be released Strike Witches.

Anastasia was raised in Dallas, graduated from the University of Alabama with a BA in Theatre, and has since returned home to pursue her acting career. Anastasia spends most of her talents on stage. She has acted with Undermain Theater, Dallas Children’s Theater, Second Thought Theatre, Kitchen Dog Theater, Project X, Balanced Almond Productions at The Ochre House, Vox Effect, Shakespeare Dallas, Labyrinth Theater, Theatre Fusion, and Firebomb Productions. She is also one of the co-producers at Second Thought Theatre. She is really into theatre magic and will step into almost any role to make it possible including costume and makeup design to choreography. In her spare time she teaches arts programs at several schools across the metroplex.