That Anime Show EP 36 The Return of Caitlin Glass

A voice actress and ADR director, best known for the role of Winry Rockbell in Fullmetal Alchemist, Caitlin has been working in the anime industry since 2004. Most recently Caitlin has played Hanna Annafellows in Black Butler II, Eila in Strike Witches, Kyoko in Initial D: 4th Stage (FUNimation), Mawari in My Bride is a Mermaid, and Maya Ibuki in  Neon Genesis Evangelion 1.0 You Are (Not) Alone and 2.0 You May (Not) Advance. Other well known roles include: Chachamaru & Chisame/Chiu in Negima, Deneve in Claymore, Dhianeila in Heroic Age, Kaori in Kanon, Hiyono in Spiral, LaLa in D.Gray Man, Miria in Baccano, Miss Anderson in Shin-chan, Nerine in Shuffle!, Saya in Black Cat,  Sumomo in Sergeant Frog,  Triela in Gunslinger Girl, Vivi in One Piece (FUNimation), and Yakumo in School Rumble. Caitlin can also be heard in BECK, Darker Than Black, Dragonaut: The Resonance, Hell Girl, Kaze no Stigma, Kenichi, Mushi-shi, Nabari no Ō, Ragnarok, Solty Rei, StrAIn, Tsubasa: RESERVoir CHRoNiCLE, Welcome to the NHK, and Witchblade, among many others. She has also voiced characters in such video games as Street Fighter IV,  Super Street Fighter IV and Street Fighter X Tekken as Cammy, Final Fantasy: The Crystal Bearers as Amitadatelion, and Infinite Undiscovery as Aya. 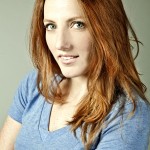